All U.S. Navy ships are identified by letter designations.  For instance, Battleships had the BB designation.  Destroyers are DD, Frigates are FF, and Aircraft Carriers are CV.   There can be additional designation information.  For instance, the letter “N” at the end of the designator indicates nuclear power.  That refers to the ship’s propulsion, not the weapons.  The Aircraft Carrier Theodore Roosevelt is identified as CVN 71.  The letter “G” added to a designator denotes guided missile capability.

When Rickover succeeded in placing reactors in Submarines, the USS Nautilus - SSN 571 was placed in service.  SSN Submarines can perform all of the tasks performed by SS boats, but have much greater endurance.  SSN submarines could circumnavigate the globe, submerged.

During the Cold War, some submarines were designed to come to the surface to launch Regulus missiles.  The USS Growler -SSG 577 was one of those Regulus boats.   The nuclear-powered USS Halibut - SSGN 587 was also a Regulus boat.  With the advent of the Polaris missile program, the Regulus program was discontinued.  Without the Regulus missile, the Halibut’s unique hull design allowed it to perform many vital spy missions against the USSR.  If you haven’t read Blind Man’s Bluff yet, I suggest that you find a copy. 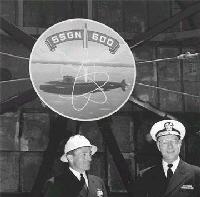 The Soviet Union’s success in space created a sense of urgency within the U.S. missile program.  Once the Polaris program was underway, the United States needed a launch platform immediately.  The USS Scorpion -SSN 589 was cut in half, and the missile compartment was inserted.  The original designator for this class of Submarine was SSGN (FBM) which indicated that it was a Submarine with  a nuclear reactor and guided “Fleet Ballistic Missiles”.  This designator was very unwieldy, and by the time that USS George Washington - SSBN 598 went to sea for the first time, that designator had been changed.  The letter “B” stands for ballistic missiles, and Submarines are the only vessels that carry them.

Trident-Missile Submarines replaced all of the original 41 for Freedom boats, but they too, are being reevaluated.  Some have had their huge Trident Missile launchers removed, replaced with Tomahawk Missile launchers, thus becoming the newest generation of SSGN boats.