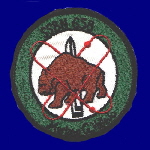 The “Valley-Joe” was launched on October 23, 1965 in Mare Island, Vallejo, California and was christened by Patricia O. V. McGettegan, great-great-granddaughter of General Vallejo.

The Vallejo was placed “In Service” in October 1966, and Sea Trials were completed a month later.  The ship was placed “In Commission” in December 1966 as the fortieth of the “Forty-One for Freedom” Fleet Ballistic Missile Submarines.

The Vallejo, the Bolivar, and the Jackson were the last three of the original Boomers to make Deterrent Patrols.  Following the Cold War and the collapse of the Soviet Union, the old boats were replaced by the new Trident Submarines.  The Vallejo was decommissioned on May 27, 1994 in Charleston.