My Navy Rating was Fire Control Technician-Guns (FTG), and although all Submariners are trained in Damage Control, fighting fires was not part of my job description. My job entailed taking care of the computers that aimed and shot torpedoes. The Rating Badge for all Fire Control Technicians included the Rangefinder. However, submarines do not have Rangefinders and no longer have deck guns. 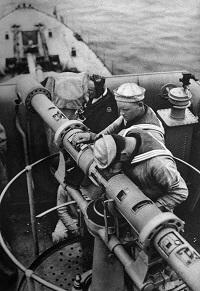 In its simplest form, the Rangefinder is two periscopes, connected together, and mounted on a tripod. The eyepiece was setup to look through both periscopes at the same time and adjust the mirrors until the target was viewed as one image. Then using the angles of the mirrors, and the known length of the periscopes, the range could be determined. 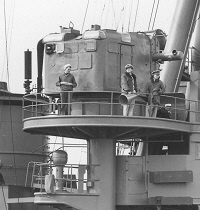 US Naval ships include Rangefinders in their Gun Directors.  As an FTG, I had to know (and was tested on) the systems that directed gunfire from surface ships without having access to them. I did tour the Battleship USS Massachusetts, and their Rangefinder was massive. But then, they were designed to lob shots for miles.

For more information on Rangefinders: Wikipedia.org/wiki/Rangefinder