"Thanks, Teddy! The Origin of Submarine Pay"
(From the Sacramento Chapter Periscope)

Should Teddy Roosevelt be the patron saint of submariners? Roosevelt was the  first American President to go aboard a submarine and to make a dive.  Roosevelt ventured beneath the waters of Long Island Sound aboard USS  Plunger (SS 2) on March 25, 1905. Plunger was the United States' second  submarine, commissioned in September 1903.

Beyond this historical first, however, is the fact that Roosevelt was the man directly  responsible for submarine pay. The Naval hierarchy in 1905 considered  submarine duty, neither unusual nor dangerous, and classified it as  shore duty. Therefore, submariners received twenty-five percent less pay than sailors going to sea in Destroyers, Cruisers and similar surface  ships.

Roosevelt's two-hour trip on Plunger convinced him that  this discrimination was unfair. He described submarine duty as hazardous and difficult, and he found that submariners "have to be trained to the highest possible point as well as to show iron nerve in order to be of  any use in their positionsâ¦"

Roosevelt directed that officer  service on submarines be equated with duty on surface ships. Enlisted  men qualified in submarines were to receive ten dollars per month in  addition to the pay of their rating. They were also to be paid a dollar  for every day in which they were submerged while underway. Enlisted men  assigned to submarines but not yet qualified received an additional five dollars per month. 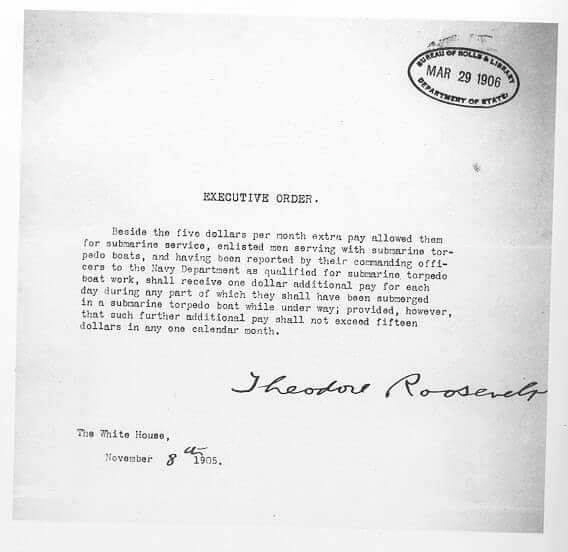 Roosevelt did not dilly-dally once he made a  decision. He issued an Executive Order directing the extra pay for  enlisted personnel. This was the beginning of submarine pay!